louie Hong and Wong Yet 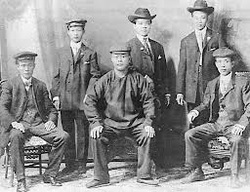 Facts About Wong Yet
Wong Yet arrived in Canada in 1895 to work
for the CPR. He settled in a town called Olds in Alberta. In 1903 his son Wong
pond, arrived to assist him in the restaurant they built. They also built a hand
laundry store.  After a huge fire
destroyed Wong Yet’s business, Wong Yet built another restaurant called Public
Lunch on the main street of the town where people most like to go.
In 1922 Frank Wong, son of Wong Pond left china for the towns called
Olds. Frank Wong was 22 years old when he left
China.
Facts about Louie Hong
Louie Hong arrived in Canada in 1909 at the
age 25 to work for the CPR. He left his 3 children behind in china with his
relatives. In 1913, he started to open a laundry store and a restaurant in Cluny
Alberta.  In 1914 he opened a
laundry store, then a general store. He always kept his prices low for a large
amount. He got married in 1926 and the couple had 9 children in total. Louie
Hong passed away in 1969.


What if Wong Yet were not living in Olds, AB? Would everything change?

If Wong Yet wasn’t living in Olds, AB
everything would change because there would be no laundry store, no restaurant,
and no general store so I would say that Wong Yet is a
Changemaker.

What if Louie Hong were not living in Cluny? Would everything change?

If Louie Hong weren’t living in Cluny, AB
everything would change because there would be no laundry store, no restaurant,
and no general store so I would say that Louie Hong is a
Changemaker.